In Money Part I, we saw that money is mostly electronic, and it's created out of thin air by banks. In Money Part II we saw that charging interest on loans requires that the entire economy grow: there must be more and more people borrowing more and more money to consume more and more stuff, or the entire system collapses. Today we ask, "Are all dollars created equal?" Yes and no. In the economy, all dollars are the same. You get the same amount of money for your 40th hour of working in a week as you get for the 1st hour. If you pay $100 for a coat, the 100th dollar has the same value as the 1st dollar.

However, this does not mean all dollars have the same value to you. We all have a life style which costs a certain amount to maintain, and we are all loath to give up our lifestyle. Let's say, for simplicity, that your lifestyle costs you $3000 per month to maintain - that is for $3000 per month, you can pay your rent and car payment, eat, buy gasoline, electricity, gas, and replace clothes and other articles as they wear out. Let's say you make $3300 per month after taxes. We'll also assume you have no savings. You have $300 per month in disposable income. You may spend this $300 in any way you wish without threatening your lifestyle. However, if you spend $400 some month on entertainment or travel, you will not have enough money to pay for your entire lifestyle. Something is going to get short changed. If you keep this up, in the long run you will lose your car or house. 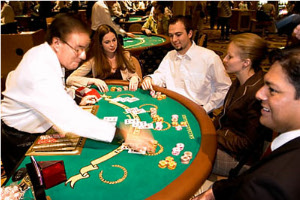 Because of this, most people are very unwilling to gamble once they have run out of disposable income. You may decide one month to go to Las Vegas or Atlantic City and drop $300 on roulette, but after the $300 is gone most people will pack up and leave. Those who leave are said to be risk averse, they don't want to risk their lifestyle for a few hours of entertainment. In a few paragraphs we'll also talk about the exceptions, the people who stay, who are called risk perverse. They are very happy to risk everything.

Let's imagine you are approached by a stranger who offers you a bet. You pay $3000, and he flips a coin. Heads you win $7500, tails you lose your $3000. Mathematically, this is a great bet: if you can make this bet 20 times, for example, you most likely will earn a total of $15,000. However, you are most likely to turn down this bet. If you lose $3000, you will be tossed out of your house and lose your car. Your lifestyle will be demolished. If you win, you have an extra $4500, which is very nice, but it's not enough money to change your life, it's not enough money to compensate you for the risk of being homeless. What we see here is your utility curve. Losing $3000 is far worse than winning $4500 is good, the $3000 loss has far greater impact on you than the $4500 win. So we can say that for you +$4500 is worth less than -$3000. Apparently not all dollars have the same value after all.

In any society there is a basic amount of money needed to maintain a basic lifestyle. In N.America this amount depends on where you live - it's far more expensive to live in Manhattan than in Dayton, Ohio. For simplicity we'll ignore this difference and just say it costs $1000 per month to have a basic life with a small apartment, an older car, and some food to eat. If you earn $1100 per month, you are very close to the edge and you would be best advised to be extremely careful with your money. If you earn $900 per month, your situation is hopeless: you simply cannot pay rent and own a basic clunker car. In this case you're going to be thrown out of your apartment on a regular basis, then have to live with friends or in your car or something for a couple of months until you can save up enough money for another apartment. Which you'll again be tossed out of in a few months. In this case your life already sucks, you have little to lose. If you lose $100 in a bet, you still don't have enough money to maintain a basic lifestyle, all that changes is maybe you'll wind up thrown out of your apartment a month earlier than normal. If you were to win $1,000,000, however, you could break this cycle of poverty forever, or at least so it's widely believed. It's critically important to the sale of lottery tickets that the big prize be more than a million dollars. 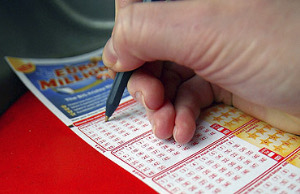 This is how the lottery works: people who have nothing to lose are promised the chance to change their lifestyle forever. It doesn't matter to them that they pay one dollar for one chance in three million to win a million dollars. The fact that the bet is a mathematically horrible bet is completely beside the point, the major point is this is perceived to be their only chance to escape poverty. It is precisely for this reason that lotteries have huge pay outs. The promise of lifestyle change is what fuels the system. There are also a few chances to win $5 or $100, this is bait to keep the gambling instinct working ("I nearly won, 5 numbers out of 6!!!"). The lottery makes use of the fact that at the very lowest income levels of our society, people are known to be rationally risk perverse - they are attracted to risk that makes no sense on a simple mathematical level. This attraction is rational in the sense that what they risk, $10 worth of lottery tickets, has disproportionately less value to them than their possible winnings, several million dollars that lifts them permanently out of poverty. The $1,000,000 is worth far more than a million times the $1 cost of the ticket. It's for this reason that I voted against the lottery: it's well understood by the people who design the games that this is a tax on the very poorest segment of our society. While it's popular to say, "No one forces you to buy a lottery ticket, it's their choice," the fact is that the situation is a little more complicated for someone with low income and poor education. While I personally feel little need to give these people a hand out, I think it's morally repugnant to design a tax to reinforce and prey on their hopelessness.

So we see that in these money terms, we have three classes of people in this country. The lower classes live near the poverty level, have little realistic chance for economic advancement, and are being told by our government that their only ticket out is to get lucky and win the lottery. The middle classes live an economically comfortable life with the ever present threat that if they step wrong they could lose everything. And the upper classes whose life is a fun game of jetting around the world to play high stakes poker with their friends.

This risk perverse behavior in the wealthiest people is the driving force for many of the worst excesses in capitalism. In particular, the implied mindless greed is responsible for stock market bubbles like the Internet bubble of the late 1990's, the recent Maddox scandal, and many of the very poorest business investment decisions made. Our society would be far more conservative in its investing if the income and wealth were more evenly distributed. On the other hand, the US best-in-the-world economic growth rate is also an outcome of this love of risk: risk sometimes leads to high payoff, as any venture capitol fund can tell you. Europe has taken most of the risk out of day to day economic life with their extensive social welfare state, and taxed their highest earners so that they have relatively few millionaires. They also have a standard of living that's falling further and further behind ours, and they have created essentially no net new jobs in the last twenty years.